The Anchorage was established in 1958, by Warren and Barbara Steadman, as a private resort for family and friends. Over the years, the couple built seasonal cottages and served three meals a day to their family and guests at the main lodge. In 1988, the couple sold the business to their son, Warren “Butch” Steadman who maintained it until 2016. 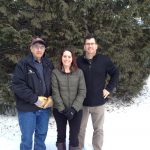 Butch Steadman along with new owners Melissa and Dave Morrissette

For David Morrissette, Lake Champlain has been a fishing destination for many years.   He was told about The Anchorage by uncles and cousins who frequented the place as far back as the 1980s. Since the late 1990’s, David and his fishing buddies stayed at The Anchorage numerous times. Not only did they enjoy full days of fishing but also fondly remember wonderful meals served by the Steadmans and good times hanging out in and around the cottages. 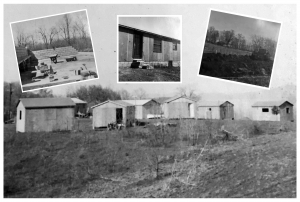 1957 Groundbreaking of the Main Lodge.

In 2012, David and his wife, Melissa, bought a second home in North Hero, VT which unfortunately ended their stays at The Anchorage. However, it strengthened their love of the Champlain Islands and making them desire permanent residency. David’s passion for fishing and the understanding of Lake Champlain’s national reputation as a destination fishery got the couple looking for a business which would allow them to share with others what the lake and surrounding areas have to offer.
By early 2016, the search was on!  But when the Morrissettes heard Butch was putting The Anchorage up for sale, they knew it was meant to be. David, with a background in sales, worked for a few small businesses in Western Massachusetts while pursuing tournament bass fishing and running his own fishing trail. Melissa, a pharmacist, grew up in the Berkshires of Massachusetts and had worked at a country inn during much of her high school and college years. After having spent over 15 years in the town of South Hadley, Massachusetts, the couple are proud to call The Anchorage their new home, the place where they spent their first anniversary together.